Aung San Suu Kyi takes her case to the nation 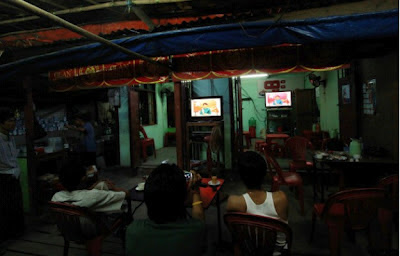 On March 14 Burmese state TV allowed something that would have been unthinkable just a few months ago: it broadcast a speech by opposition leader Aung San Suu Kyi. Her speech, which wasleaked online a few days earlier, was partly censored by the authorities, who deleted some unflattering references to the still-powerful military.

But even the broadcast version enabled Suu Kyi, who is running along with other members of her party in the much-anticipated parliamentary by-election on April 1, to deliver a powerful message to a national audience. In her speech, she said that her party, the National League for Democracy (NLD), will pursue three priorities should it achieve a presence in parliament: It will work to promote the rule of law, to end the civil war, and to amend the 2008 constitution that grants 25 percent of the seats in parliament to the military without any of its candidates having to stand for election. Aung San Suu Kyi also pledged to support market-oriented economic reform, improvements in education, language rights for ethnic minorities, greater opportunities for young people and women, and freedom of association for labor unions and farmers.

These are all issues that will no doubt resonate with the majority in this ill-fated country. But how is the NLD supposed to achieve them even if it gets all 47 of the seats that it hopes to win in the election?

The current parliament, created after a 2010 election that took place according to rules laid out by the same military regime that has controlled Burma since 1962, is dominated by the generals and their stooges. It's not just that a quarter of the national assembly is reserved for members of the military. About 80 percent of the remaining 498 seats are controlled by the Union Solidarity and Development Party (USDP), the tame party of the old junta. So it's hard to imagine how Aung San Suu Kyi will be able to deliver on her campaign promises unless the military cooperates.

So why, then, should we care about these elections at all?

First of all, the generals want to show that they're capable of holding free and fair elections, since that's the only way that they'll get the U.S. and the European Union to lift the sanctions they imposed on Burma years ago. For that reason, I'm inclined to think that the election is likely to be conducted in an internationally acceptable manner -- at least on the day of voting, and perhaps with some local exceptions. Although there are some reports of irregularities with voter lists in the run-up to the elections, sources in the government say privately that they wouldn't even mind if the NLD wins half of the contested seats, since that would lend additional legitimacy to the whole process.

But Suu Kyi is aiming for a sweeping victory, treating the by-elections as a referendum of public support for her leadership. Some analysts estimate that the NLD can win up to two-thirds of the available seats.

I believe that the NLD will fare very well in the races held in the main cities, but I'm afraid that the party candidates will run into problems in some rural constituencies. The reasons are simple: intimidation and bribery. The USDP in the countryside has both a strong grassroots organization and a lot of financial power. Farmers and the rural poor are expected not to disappoint local party bosses politically if they want to avoid harassment, and sometimes they even benefit from a bit of microcredit administered by its strongmen. The USDP's local thugs are notorious for their sanctions against opposition supporters. In a recent interview with the Voice of America (Burmese Service), the USDP campaign chief for Rangoon said that his party will seek votes from the public by going door to door in the neighborhoods (and by that he doesn't mean just handing out campaign literature). The rural people who live in remote and scattered communities can expect the ruling party to wield both incentives and punishments to dissuade them from voting for the NLD.

Aung San Suu Kyi is well aware of such techniques. In one of her public speeches, she advised people to pretend to be fearful of the authorities if they are pressured to vote against their will - and then to vote for the NLD.

The NLD can hope for a sweeping victory only if people practice what political scientists call "sincere voting" -- votes from the heart. Let's see if they can get away with it.

Like you, I am a blogger on Google's Blogger. I am leaving this comment to you because you do not, on your blog or profile, have an easy way of contacting you, such as via e-mail. So this comment is directed to you, not about your article. For this, I apologize.

If you contact me, I can give you some hints on your blog, and perhaps we can collaborate such as by linking our blogs (yours has no ability for followers of your blog). I am not an internet wiz, instead, it is my 13 year old son.
I just write the articles.

The reason I am writing is that I am a devoted blogger and journalist, as you are, albeit living in far better conditions (although I have suffered oppression in America far worse than you can imagine). For example, I have been to prison three times for "civil contempt" which is not a crime but is within the discretion of a judge, without appeal, to sentence someone for not following that judge's orders. While we don't have torture so much in America, it is still degrading for a 47 year old well respected lawyer to be hand cuffed and literally deprived of life, property, and have his live in danger.

But the main point I am writing you is that I am also committed to social justice and to freedom, such as in the "Arab Spring." I have always known about Burma/Mynamar, but saw little hope or to write about. I was wrong, as recent events have proven. I apologize for my indifference while so many suffered.

I would like to cover the situation in Burma, and would like your help, which can be mutually advantageous.

Please contact me. My e-mail is lawphila@aol.com
My name is David M. Ginsberg
My skype is DavidMGinsbergEsq
(but I travel much and rarely have skype on).

My Blog, which you should visit to see who I am and what I am abou is http://usa-china-international.blogspot.com/.

I have a second "mirror blog" on wordpress as some countries censor Google's Blogger. That URL is http://davidmginsberg.wordpress.com/author/davidmginsberg/.\

I hope you get this message. In any event, keep up the good work.