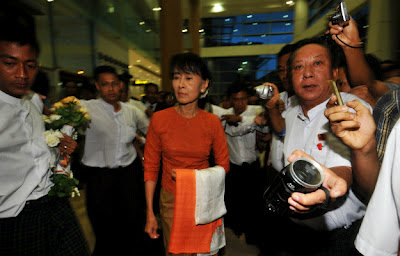 This week, The New York Times covered Aung San Suu Kyi's visit to Thailand -- the first foreign trip for Burma's opposition leader in 25 years. Many people who have dealt with Suu Kyi and her political entourage over the years say that the Times report, which described a striking lack of organization in the upper ranks of the National League for Democracy (NLD), was spot-on.

Last week, Suu Kyi's staff turned down a request for a meeting from Paul Collier, one of the world's top economists. Their excuse: The Lady was busy. "Perhaps her staffers don't know who Collier is," one source in the opposition told me. "The Burmese opposition movement has missed the chance to benefit from a great mind." Meanwhile, government newspapers covered have reported that ministers and presidential advisors gave Collier plenty of time.

Prominent experts from the Burmese exile community, many of them with valuable experience acquired in their years abroad, say that the NLD is ignoring them even while the government is actively soliciting their services. "There is no proper mechanism set up by Suu Kyi for Burmese researchers to play a contributing role to the opposition movement," says a Burmese scholar who graduated from a top U.S. university and visited Rangoon a few months ago.

The NLD is also having problems with reporters. Lately there have been increasing tensions between the NLD and local journalists. In early May, a member of Suu Kyi's security staff manhandled a local photojournalist who tried to take pictures of the Lady. Local reporters say that the bodyguards abused them, saying: "You media people are doing this for money. We don't make a f---ing penny. We face jail time because we're doing politics."

Many NLD members suffered under the previous regime. But Suu Kyi, who holds to a rigorous moral code, rightly tends to dismiss those who bring this up. She once famously said: "If you choose to do something, then you shouldn't say it's a sacrifice, because nobody forced you to do it." Moreover, since many journalists (and activists-turned-journalists) were also imprisoned by the military regime for their political and professional work, the self-righteousness and arrogance of the NLD members are likely to backfire.

Local reporters have complained in the past few weeks that the NLD no longer issues open invitations to the media to cover important political events, such as Suu Kyi's recent meeting with India's Prime Minister Manmohan Singh.

Maung Wuntha, a well-respected veteran journalist and a former leading member of the NLD in 1988, told me that the NLD staffers who are close to Suu Kyi need to learn how to work in a more media-friendly manner: "Many of them tend to see journalists as careerists who do not have any principles and commitment to the interests of the country. This perception is a serious problem. Unless they realize that journalists are doing a public service, we aren't going to see any fundamental improvement in relations between politicians and reporters."

Another public criticism of Suu Kyi and her staff has come from an unexpected source: staunch NLD supporters outside of Burma. Eight major Burmese exile organizations -- including such dedicated and well-connected groups such as the Network for Democracy and Development, the Women's League of Burma, and the Human Rights Education Institute of Burma in Thailand - asked for some face time with Aung San Suu Kyi during her visit in Bangkok, but to no avail. For perhaps the first time since 1988, many prominent exiled activists came together to express their frustration in the Burmese-language media. "We feel sad," said Khin Ohmar, NDD chairwoman, told The Irrawaddy, a leading Burmese-language magazine. "We have worked tirelessly for our country since 1988. We can't go home, so while our leader's visiting us here, we all would like to meet her and exchange views and experiences."

You can find signs of frustration not only on the Thai-Burmese border, but also in the capitals of the United States and Europe. Several lobbyists who relentlessly advocated on behalf of Suu Kyi and her "principle-centered policy" of economic sanctions for decades are now disoriented by the Lady's apparent lack of coordination and inability to delegate. A dedicated Suu Kyi advocate told me he's been trying to get in touch with the NLD's information department for months to arrange a conversation between Suu Kyi and the president of a newly democratizing Asian country, but his correspondence has gone unanswered.

Of course, it's not fair to blame Suu Kyi for all these problems, given that the party's organization is still weak. Most party activists (including herself) have spent long periods in detention - perhaps the most important among many legitimate excuses for the problem. By now, though, it's high time for Aung San Suu Kyi and her party to step back, practice self-criticism, and think aloud about whether they have burned too many bridges too quickly in this transitional phase. Perhaps what Suu Kyi needs is not just an entourage, but a full-blown chief of staff with a proper team that is capable of strategic planning and management and can support her in the decision-making process. Moral courage and clarity are hugely important in politics, but you also need the capacity to cultivate your base and craft sound policies if you really want to get things done.