The latest intrigues in Burma 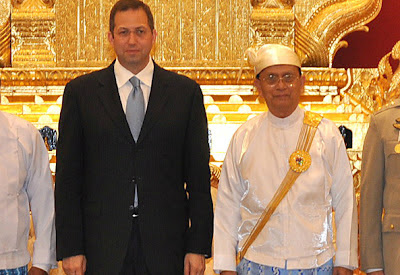 When the news broke earlier this week that military appointees in Parliament had nominated a new vice president, some media outlets reported that a new hardliner was replacing an old hardliner, while others confidently stated that "yet another hardliner is being replaced by a reformist."
Let's start by unpacking the facts. Last week the Burmese government announced the resignation of the country's first vice president due to "health reasons." An ex-general, Vice President Tin Aung Myint Oo was known as a corrupt hardliner. The man likely to take his place, Myit Swe, is also a former general as well as a member of the military-backed Union Solidarity and Development Association (USDA) and chief minister of the Rangoon division of the government.
Burma's next vice president has a close personal relationship with former dictator Senior General Than Shwe that contributed to Myit Swe's successful career in the military. Myint Swe was given the critical job of overseeing security in Rangoon, the former capital, in 2001. In the late 1990s, he was brought in to take over the position of general staff officer, a powerful role in the War Office, which was then occupied by ex-Brigadier General Thein Sein, the current president. (He's shown above earlier this week, along with newly appointed U.S. Ambassador Derek Mitchell.) When the former intelligence chief and prime minister, Gen. Khin Nyunt, was purged in 2004, Myint Swe got the job of restructuring the country‘s intelligence agency.
According to Irrawaddy Magazine (which last May accurately predicted Myint Swe's appointment as vice president), Myint Swe was directly involved in the crackdown on the Buddhist monk-led "Saffron Revolution" of 2007, which resulted in scores of deaths. Most recently, Myint Swe has confronted local journalists working with exile media outlets and reporting on the sectarian violence in western Burma. He threatened journalists who violate the military's strict censorship with up to nine years imprisonment, under existing law.
The question is whether or not Myint Swe's vice presidency can constrain President Thein Sein's reform initiative. Regardless of whether Myint Swe is a hardliner or a moderate, it's highly unlikely that he'll be able to disrupt the reform course. The reforms are beginning to gain momentum, spurred increasingly by the government's emphasis on improving the domestic economic situation. Since last year, all the generals-turned-civilian power-holders are competing to prove their reformist credentials.
The first event to undermine the hardliners last year was President Thein Sein's decision in September to suspend construction of the Chinese-backed Myitsone Dam, a multi-billion dollar project to generate hydropower from Burma's Irrawaddy River and sell it China. At first, Beijing was shocked by the decision, but soon backed down and has since tried to reason with the Burmese government to resume the project. So far, China has not tried to complicate Burma's internal politics by giving pro-China foes of the reforms (such as retired vice president Tin Aung Myint Oo and Electric Power Minister Zaw Min) external leverage, and that lack of support from Beijing seems to be weakening the hardliners within the regime. (There are reports that the president is likely to reshuffle his cabinet and remove Zaw Min and other hardliners soon.)
The second event to shake the hardliners' control last year was when a group of conservatives in the ruling USDP party lobbied ex-dictator Than Shwe to ask that President Thein Sein cancel the April 1 by-election (which subsequently brought Aung San Suu Kyi's NLD to parliament). According to sources close to the USDP, Than Shwe turned out to be indifferent to political details so long as the policies of his successors did not jeopardize the political safety or material well-being of his family. The failure to secure sufficient backing from Than Shwe was a major blow for the hardliners. Now no one in the government is willing to openly show sympathy with the conservatives.
But here's a caveat. Though the ruling elite remains broadly united on the big questions, there's still one factor that could cause a split within the leadership. The ex-generals have to figure out a strategy to contain Aung San Suu Kyi's popularity and prevent her from winning another sweeping victory in the 2015 general elections. Since Thein Sein and some other reform-minded leaders see themselves as one-term leaders, they're relatively unconcerned about losing the next election; what worries them more is preserving their reform agenda and making a reputable exit. This sets them off from the younger generation of leaders-in-waiting within the USDP, who still can't shake the bitter aftertaste of their party's humiliating defeat in the April by-elections. This divergence of interests could yet lead to a fundamental schism within the political establishment.
Click here to read the article on Foreign Policy website
Posted by Min Zin at 7:51 PM