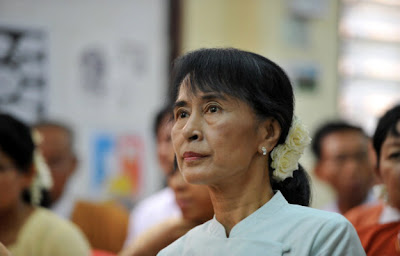 On April 23, 43 members of the National League for Democracy (NLD) are supposed to take up their seats in Burma's national parliament. But before they can do that, they have to swear an oath. Now NLD leader Aung San Suu Kyi has started a fight over its wording.

The MP-elects have refused to take the pledge because it requires them to state that they will "uphold and abide by the Constitution of the Union." The constitution in question is the one that was adopted in 2008 as the result of a process orchestrated by the then-ruling military junta and denounced by most outside observers as illegitimate. During the recent election all the NLD candidates campaigned on a promise to amend this constitution. In a recent meeting with President Thein Sein, Suu Kyi asked that the text of the oath be changed from the present version to one that stipulates only "respect" for the constitution.

The present standoff was preceded by a lot of complicated maneuvering that probably isn't worth going into. Suffice it to say that it will be almost impossible for the NLD leader to get her way unless the government amends the constitution itself accordingly. While some sources suggest that Thein Sein might be willing to concede the point, it will be very hard for him to do so without causing considerable discontent among other members of the ruling elite.

While the NLD has threatened to boycott parliament if its demand isn't met, Aung San Suu Kyi has tried to avoid saying this all too directly. "We won't say we are not attending parliament," she toldRadio Free Asia in an interview on Thursday. "We will attend after the oath [is amended]."

This is an unfortunate strategic blunder for the leader of the NLD. She has put herself in an unnecessary dilemma. First of all, the point at hand is largely symbolic. Semantic issues in politics are usually about saving face. Vowing to "uphold and abide" the constitution does not mean that the opposition can't try to amend it later. A quick look at the texts of other countries' oaths of office shows that words like "uphold" and even "defend" are commonly used, but such language has never prevented anyone from proposing constitutional amendments.

Second, the timing is bad. When she reached her pre-election deal with the regime to change the Party Registration Law so that the NLD could run, Aung San Suu Kyi should have known that the language of the oath appears not only in the Party Registration Law but also in the constitution. If she wanted to make an issue of it, she could have done so then. Now she should just ignore it for the sake of establishing normal working relations with the incumbent legislature and the government.

Third, Suu Kyi has picked the wrong person as her interlocutor. She is relying too heavily on the president and the executive branch. Amending the constitution is a job that should be carried out by parliamentarians. While there is a clear institutional and personal rivalry between the executive and legislature branches, Suu Kyi's personal approach to the president could backfire. Rather ominously, a high-ranking officer has now seen fit to state that the army is determined to protect the constitution (and, along with it, the military's dominance in politics). In an interview last month, Htay Oo, the leader of the military-aligned party that holds the overwhelming majority of the seats in parliament, told FP that he sees no need for an amendment. Given the enormous humiliation inflicted on Htay Oo's party by the NLD in the election just past, Aung San Suu Kyi's insistence on a semantic issue will be viewed in some quarters as rubbing salt into the losers' wound.

In short, while fulfilling the NLD's demand might make many members of the opposition feel better about their implicit cooperation with government institutions, hardliners within the military and the regime are likely to gain powerful ammunition in their fight against Thein Sein. If the president and his fellow reformers compromise on this issue, they expose themselves to the accusation that they are giving too much away to Aung San Suu Kyi and the West.

Perhaps the dispute can be resolved with some sort of trade-off. Otherwise the cost of further escalation and eventual deadlock will almost certainly prove high both for pro-reform officials and the opposition. By participating in the election Aung San Suu Kyi chose to play by the regime's rules; now she needs to pick her battles rather than wasting valuable energy in a fight over symbolism. There's an old Burmese proverb: "If you choose to live like a bug inside a chili pepper, you can't really complain if you start feeling hot."