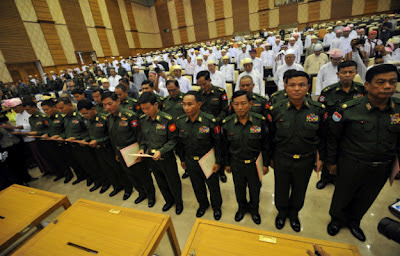 Since the general election in 2010, the Burmese military has proved itself to be quite savvy. The new generation of leaders have focused on modernization in order to bring their forces up to the level of their Southeast Asia counterparts. Their strategy is to decrease their reliance on China (which, they believe, takes advantage of Burma's international isolation) and to seize the opportunity to intensify their dealings with the West.
Sources close to the U.S. government told me that U.S. delegations to Burma are generally impressed by the openness of the leadership of the Tatmadaw (the armed forces). "Whenever senior U.S. officials meet a Burmese military chief or defense minister and raise the issue of human rights violations committed by the army in ethnic areas, the military doesn't deny it," says a source. "They admit that things are not very pretty on the ground, and ask for U.S. assistance, including training for the Tatmadaw officers." Not bad.
Earlier this year, Burmese generals expressed a wish to participate in the annual, multinational, U.S.-led "Gold Cobra" military exercise in the Asia-Pacific region. Secretary of State Hilary Clinton has also reportedly asked CIA chief David Petraeus to visit Burma later this year. This is no coincidence.
In its efforts to court the West, the Tatmadaw wants to avoid cracking down on any Arab Spring-style of popular revolt that may arise at home. Therefore, military leaders are tolerating political liberalization, the incorporation of urban dissidents and ethnic rebels into the regime-led transition, and even the surging assertiveness of opposition forces. This toleration will likely continue so long as the reform process does not challenge the military's veto-wielding political supremacy and economic interests.
Of course, the actual process of opening up can unfold with unforseen political twists and turns, and lead to unintendend consequences: The sweeping victory of Aung San Suu Kyi's National League for Democracy (NLD) in the April 1 by-elections is a case in point.
Still, the Tatmadaw hasn't opted to reverse course. Instead, it made another smart move bystrengthening its position in parliament, where its officers are constitutionally guaranteed 25 percent of the seats. On April 22, the Tatmadaw replaced 59 of its high-ranking military representatives in parliament (39 in the lower house and 20 in the upper house). Currently, there are 322 civilian and 110 military representatives in the lower house, and 168 civilians and 56 military members in the upper house.
Many observers interpret the influx of new blood to mean that the military is preparing a counterbalance against the incoming NLD parliamentarians, led by Aung San Suu Kyi. They are vowing to amend the constitution and trim the military's prerogatives. (Today, in a rather dramatic reversal, she announced that she and her party colleagues who emerged victorious from the April 1 elections have agreed to take the parliamentary oath despite their expressed opposition to the wording.)
In any case, the fact that the Tatmadaw is attaching importance to the parliament is a good sign. It's a step toward acknowledging that parliament is more than a rubber-stamp leglisature that simply endorses decisions made elsewhere. Instead, the military may actually begin to rely on the legislature as a mode of governance, a forum for articulating policy preferences, and a tool for mediating the broader interests of a diverse society. Despite all this, the Tatmadaw continues to hold final say in Burmese politics. Its political will and potential capacity to build legislative institutions should not be disregarded, since all the other institutions in this ill-fated country so far remain completely dysfunctional.
Posted by Min Zin at 12:18 PM