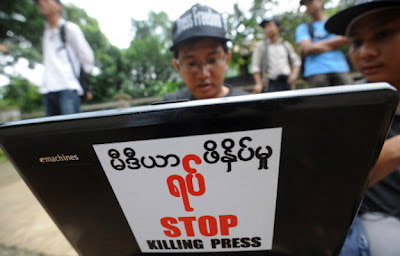 Will the relaxation of Burma's severe censorship laws usher in the age of a responsible, responsive media -- or are Burmese journalists right to worry that the state is still watching them closely?

On November 13, 2010, Nobel Laureate and Burmese opposition leader Aung San Suu Kyi was freed from house arrest. A few days later a sports magazine called First Eleven ran a full front-page story with three innocuous-looking headlines -- "Sunderland Freeze Chelsea," "United Stunned by Villa" and  "Arsenal Advance to Grab Their Hope" -- about a trio of English Premier League soccer matches. The journal submitted its advance copy of the page in black and white to the country's notorious censorship board for approval. It was passed.