Aung San Suu Kyi is headed for the U.S. 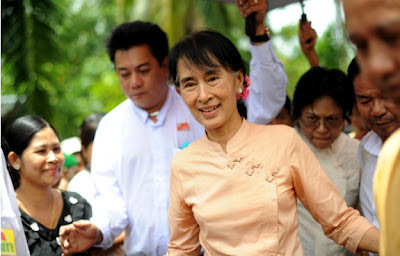 Aung San Suu Kyi, the Burmese democracy leader and Nobel laureate, is coming to Washington, D.C. On September 19 she is set to receive the Congressional Gold Medal. This is the highest civilian honor bestowed by the U.S. Congress, and it will be presented to Suu Kyi "for her leadership and steadfast commitment to human rights and for promoting freedom, peace and democracy in her home country of Burma," said House of Representatives Speaker John Boehner.
During her short visit, Aung San Suu Kyi will travel to New York, Kentucky, and the West Coast. Along the way she'll receive several other honors and awards, including the Global Citizen Award from the Atlantic Council in New York. She will also be speaking at universities and think-tanks as well as addressing members of the Burmese diaspora community. On September 20, she is slated to speak at the National Endowment for Democracy for a ceremony that will present awards to five other fellow Burmese political and social activists.
According to Burmese lobbyists in Washington, First Lady Michelle Obama has invited Suu Kyi to stay overnight at the White House. Former U.S. President Bill Clinton, as well as Microsoft Chief Bill Gates, will attend a White House dinner hosted by President Obama and the First Lady in Aung San Suu Kyi's honor. Her visit is sure to draw lots of media attention both in the U.S. and Burma.
Meanwhile, Burma's reformist President Thein Sein is scheduled to arrive in the United States for a three-day visit starting on September 24. He will speak at the UN General Assembly in New York. The trip was made possible by the visa restriction waiver issued last month by President Obama. Otherwise the Burmese leader's visit would have been confined to a narrow area surrounding the UN headquarters, since the 2008 law barred entry into the U.S. for Burmese officials implicated in human rights abuses.
Burma's leading human rights activist and its president, an ex-member of the ruling junta, are visiting the United States at the same time. It's an unprecedented situation. So what should we expect from the visits?
A new report by the Center for Strategic and International Studies recommends that President Obama meet with both Aung San Suu Kyi and President Thein Sein. An advocacy group close to U.S. officials has confirmed to me that Obama will very likely meet with Thein Sein in New York. But the Obama administration has informed Burmese authorities that the president expects the release of the remaining political prisoners -- about 300 to 500 of them -- before he receives Thein Sein.
Thein Sein and Suu Kyi are both likely to raise the policy issue of removing the trade sanctions against Burma. Even though Congress renewed the law on sanctions against Burma last month, the White House has the authority to waive that legislation. Thein Sein will likely appeal to President Obama to exercise this authority -- and Suu Kyi will probably endorse Thein Sein's agenda. Burmese leaders may also press President Obama to provide bilateral assistance to Burma.
While many exile activists would like to focus on ending the civil war in the Kachin region, or insist on regarding the release of the remaining political prisoners as a precondition for further U.S. concessions, Suu Kyi may focus on somewhat more abstract issues, such as responsible foreign investments and the rule of law in Burma. Her speeches will call for what she has referred to elsewhere as "democracy-friendly development growth."
Yet Suu Kyi could make a huge difference for Burma by persuading some top U.S. universities to accept Burmese students, who could receive urgently needed training in economics and international law. If she can secure funding for travel and capacity training for Burmese civil society and media groups from U.S. donor agencies, civic foundations, think tanks, or news organizations, this would also make her trip of great service to her country. She can also persuade Burmese professionals and businesspeople living overseas to return to Burma and help in the country's transition. These are the sorts of measures that can bring tangible benefits to the country as a whole.
All in all, the visits of both leaders could yield win-win outcomes for all players involved in Burma's transition (including the U.S. itself). Thein Sein can garner further international applause for his reforms, and perhaps secure promises of a gradual removal of the sanctions on Burma. Suu Kyi will undoubtedly impress U.S. politicians with her charisma and moral authority, and this will demonstrate to her detractors back home (including those in the ruling party and the military) that her larger-than-life image in the West is crucial to Burma's transition by helping civil society access much-needed resources from the West. Finally, both trips will also serve the interests of the U.S., which is trying to balance against surging Chinese power in the Asia-Pacific region. Burma is a critical link for China, providing access to the Indian Ocean as well as a supply of natural resources, so boosting American influence there is good for Washington.
It would be easy to dismiss Aung San Suu Kyi's contribution to the reform process as something purely symbolic. But this is wrong. Hers has been a concrete political achievement, reinforced by her conspicuous toughness and moral rigor.
The reforms initiated by the military-backed government would not have been able to achieve any success without Suu Kyi's endorsement. Aung San Suu Kyi has, in fact, proved herself to be Burma's most important asset. We can fairly expect that with this historic trip to the U.S., the Lady will continue to put her prestige to good use and manage to keep Burma high on the list of the foreign policy priorities of the United States. Her story shows that having moral authority and exercising real political power are not always mutually exclusive.
Click here for article on Foreign Policy website
Posted by Min Zin at 7:28 PM