Return of the Myanmar Military?

Return of the Myanmar Military?

YANGON, Myanmar — During his visit to Myanmar last week, President Obama sounded a word of caution, saying the process of reform was “by no means complete or irreversible.” His tone was decidedly less enthusiastic than during his previous visit, in 2012. Back then, the recent inauguration of the pseudo-civilian government of President Thein Sein seemed to signal the advent of liberalization after almost half a century of military rule. Many political dissidents were then released from jail or house arrest, notably the democracy icon Daw Aung San Suu Kyi.

But now progress has stalled on almost all major issues: power sharing with the opposition, peace talks with armed ethnic groups, Buddhist-Muslim relations, minority rights, media freedom. Progress has stalled because the military is tightening its grip once again.

The Tatmadaw, as the armed forces are called, has grown increasingly assertive in recent months, even as the country prepares for a historic general election next year, the first since the military junta’s formal dissolution in 2011. Not only is the Tatmadaw increasingly exercising the expansive prerogatives it gave itself in the 2008 Constitution; it is trying to extend its powers further. 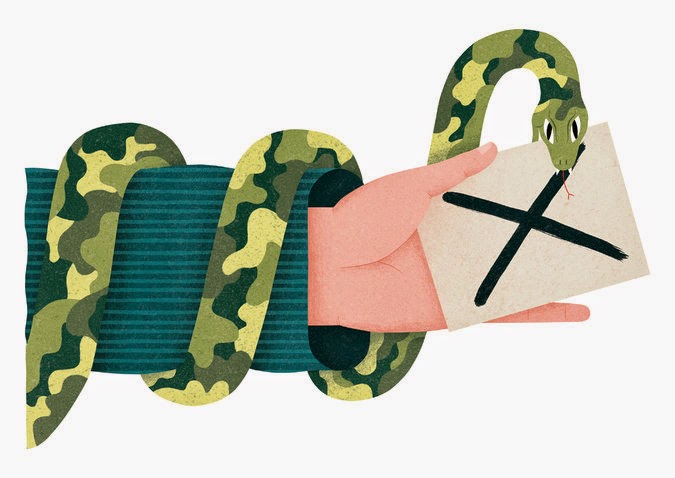 The recent killing of the freelance journalist Par Gyi, a former bodyguard of Ms. Aung San Suu Kyi, is just one glaring example. Mr. Par Gyi was allegedly shot while in army custody in early October. At first the army tried to hide his death, only to claim three weeks after it occurred that he was shot by soldiers while trying to escape. After the authorities exhumed Mr. Par Gyi, images of his mutilated body circulated on Facebook and outraged the general public, confirming suspicions that he had been tortured.

But the episode seems only to have revived the military’s siege mentality. The army is unlikely to allow any civilian court to look into the case; it will rather prosecute its own commanders if necessary to protect the institution’s credibility overall. And under the 2008 Constitution, “in the adjudication of military justice,” the decision of the commander in chief is final.

Submitting to civilian oversight would be risky. A recent report by Harvard Law School names three senior generals in connection with crimes against humanity and war crimes suffered by ethnic Karen between 2005 and 2008. Transitional justice is a threat to the army’s unity, and in the past would have been just the kind of threat to justify a coup. The issue today isn’t so much whether the military would consider a takeover — times have changed — but rather how far it will go to protect its narrow interests in the face of public opposition, just a year before a general election.

Another gauge of its resolve is constitutional reform. Throughout 2013, a special committee appointed by Parliament solicited views from the public about whether, and how, the 2008 Constitution might be improved. In a separate petition, the main opposition party gathered five million signatures from people asking for a relaxation of the amendment clause. Modifying major provisions of the Constitution, including the amendment clause itself, requires a 75 percent majority in Parliament — which gives the military veto power since by law it holds 25 percent of parliamentary seats — and then a majority of votes in a national referendum. This exceedingly high threshold blocks any fundamental constitutional reform, including of the provision prohibiting Ms. Aung San Suu Kyi’s candidacy for the presidency and of clauses governing taxation and the appointment of provincial authorities in ethnic areas.

Yet during debates in Parliament last week, the military’s representatives declared that the amendment clause should be maintained. The Tatmadaw may never have considered allowing Ms. Aung San Suu Kyi to run for president. For a time, however, it did seem to want to increase the autonomy of ethnic regions, if only to curry support among ethnic political parties and armed groups. Its recent inflexibility is a notable change, and a sign of its growing insecurity.

This is especially ominous because the military’s hardening risks causing friction with the Thein Sein government: Last December, the ruling Union Solidarity and Development Party, an offshoot of the old military junta, had granted its conditional approval for amending the Constitution’s amendment clause.

In the initial phase of liberalization, the military tended to follow Mr. Thein Sein’s reform initiatives. The generals rarely defied the political agenda of the president, himself a career army bureaucrat, except to defend their economic and tactical interests. But according to several senior aides to Mr. Thein Sein, relations between the president and the commander in chief, Senior Gen. Min Aung Hlaing, are increasingly out of sync. Several sources close to both men told me that General Min Aung Hlaing’s tougher tactics of late were reminiscent of the style of Senior Gen. Than Shwe, Myanmar’s military leader from 1992 to 2011, suggesting that General Than Shwe may still be pulling the strings behind the scenes.

Lately, the military leadership has called for expanding the role of the National Defense and Security Council, a military-dominated 11-member body that holds wide-ranging powers, including the right to take over from the civilian government in a state of emergency. During the parliamentary debates last week, military representatives argued that the N.D.S.C. should be able to dissolve Parliament if one-third of the seats become vacant.

Were this proposal an isolated case, it might simply be a maneuver by the military to increase its leverage. But like one of several such moves recently, it is evidence that the generals are hardening their stance with little regard for international opinion, the will of the voters, or even relations with Mr. Thein Sein. After a brief moment of promise, the new Myanmar is increasingly starting to look like the old.

Min Zin is a contributor to Foreign Policy’s blog Democracy Lab, and serves as a Myanmar expert for think tanks and NGOs like Freedom House.

A version of this op-ed appears in print on November 18, 2014, in The International New York Times. Order Reprints|  Today's Paper|Subscribe

Email ThisBlogThis!Share to TwitterShare to FacebookShare to Pinterest
Labels: Op-Ed