The People vs. The Monks

One of the darkest aspects of Myanmar’s political transition is a surge in religious intolerance, especially toward Muslims. Liberalization has lifted the lid on many pent-up grievances, and old-timers in the government and the monkhood are stoking these sentiments.

Last week the government proposed a law that would require anyone who wants to change religion to first seek permission from local authorities; it would also penalize proselytizing through “improper influence and persuasion.” This is one of four bills the government has drafted at the instigation of a powerful group of radical Buddhist monks called Mabatha, backed by a petition with 1.3 million signatures. The other three bills contemplate restricting interfaith marriage, birth rates and polygamy. Though phrased broadly, all are a veiled attack on Myanmar’s religious minorities, especially its 2.2 million Muslims.

A coalition of almost 100 civil society groups, led by well-known women activists and ethnic minority leaders, immediately protested the president’s endorsement of the discriminatory laws. The Mabatha denounced them as “traitors,” but that only prompted more civil society groups to oppose the bills. Facebook lit up with posts and comments like, “Count me in; I am a traitor, too.” The publication The Voice criticized “crony monks” for trying to advance the government’s authoritarian agenda. 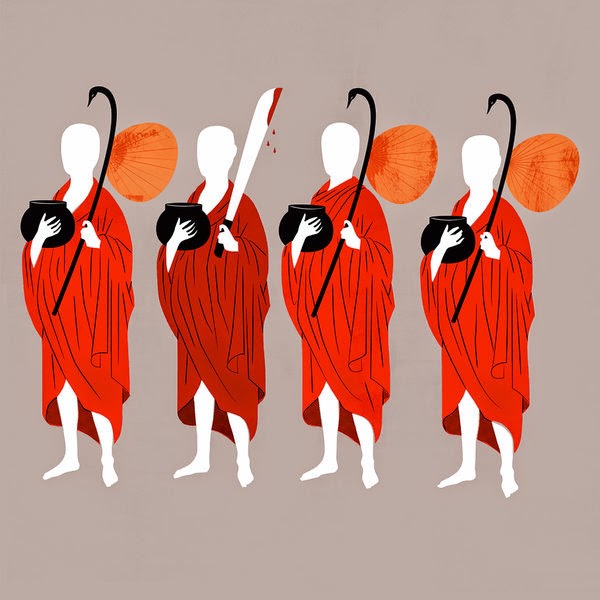 This reaction is unprecedented. Myanmar’s Buddhist order is arguably one of the clergies in the world that commands most deference from its followers, and never before have so many lay Buddhists pushed back against the monks for political reasons. Buddhist sects have had disputes among themselves about the tenets of monastic discipline: Should a monk’s robe cover both shoulders or just the left? And there have long been conflicts between the order and the state. Many monks opposed British colonial rule, with some joining the armed struggle against it, and from the 1980s through the late 2000s, monks rallied students to form the vanguard of the pro-democracy movement.

Intellectuals have sometimes criticized monks, but typically it was for falling short of their own rules, not for political reasons. We were taught to think of any corrupt monks as deviant, keeping intact our faith in the virtue of the robe and the wisdom of the Buddha.

Buddhist nationalism took a turn for the extreme in mid-2012, when riots broke out between Buddhists and Rohingya Muslims in the western state of Rakhine, killing 300 people and displacing about 140,000, mostly Muslims. (The government refuses to acknowledge the Rohingyas as a distinct ethnic group, and many people in Myanmar consider them to be intruders from neighboring Bangladesh.) When the violence spread to other parts of the country and to non-Rohingya Muslims, who were thought to be better integrated, it seemed that natural bigotry was being manipulated.

Mabatha and the 969 Movement have run a broad anti-Muslim campaign, from organizing economic boycotts against Muslim businesses to, some charge, inciting pogroms. During a visit by a delegation from the Organization of Islamic Cooperation last year, monks marched through Yangon with banners calling Islam “a faith of animals with uncontrollable birthrates.” Other monks have even been accused of instigating killings early last year in the town of Meiktila, in central Myanmar, where Buddhist mobs destroyed Muslim neighborhoods, killing at least 44 people, including 20 students and several teachers at an Islamic school.

These extremist monks are proving to be valuable political allies for the ex-military leaders of the pseudo-civilian government. Ashin Wirathu’s camp criticizes the opposition leader Daw Aung San Suu Kyi for being too weak in her defense of nationalism and Buddhism. (The other side criticizes her for being too weak in her defense of minority rights.) The radical monks oppose amending the current military-drafted Constitution to let Myanmar nationals with a foreign spouse or children run for the presidency, which would open the way for Ms. Aung San Suu Kyi in the 2015 election. Meanwhile, some monks are pushing to obtain the right to vote, which the Constitution also bans.

But this rise in religious radicalism has created a countermovement bringing together over one hundred civil-society actors, including the pro-democracy 88 Generation Students Group; popular monks like Metta Shin U Zawana; Muslim and Christian groups; ethnic minorities; associations of intellectuals like PEN Myanmar; much of the mainstream media; and young bloggers like Nay Phone Latt. Together they have launched an anti-hate speech campaign, released official statements of protest, petitioned the legislature and lobbied the international community to condemn discrimination in Myanmar.

Their approach has a distinctly Burmese feel. They are rejecting extremism without entirely embracing Western values. Wholesale secularism hardly features in their calls; religiosity and spirituality are still prevalent in Myanmar. But local prejudice does feature: Some leaders of the 88 Generation Students Group also refuse to acknowledge the Rohingyas as a distinct ethnic group.

Critics of Mabatha and the 969 Movement tend to couch their objections without reference to human rights. Instead they challenge the radical monks for staying silent about deepening poverty throughout the country and, say, the crackdown in late 2012 on Buddhist monks protesting a Chinese copper mine. In other words, they are mostly criticizing the extremist monks for doing the ex-military’s bidding.

The unprecedented chasm between the monkhood and the people is for now a source of tension and turmoil. But it augurs well for the country’s political and social development in the long term. The advent of a countermovement to Buddhist extremism suggests that the people of Myanmar are emancipating from traditional elites and taking a major stride toward modernity and democracy.

Min Zin is a contributor to Foreign Policy’s blog Democracy Lab and serves as a Myanmar expert for think tanks and NGOs like Freedom House.

The People vs. The Monks

A version of this op-ed appears in print on June 7, 2014, in The International New York Times. ntinue reading the main storyOrder Reprints|Today's Paper|Subscribe
Posted by Min Zin at 1:14 PM