Burma: How to end a civil war 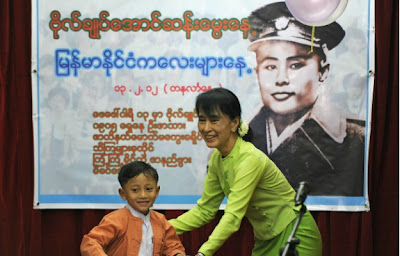 On Sunday, President Thein Sein gave a speech on the occasion of the 65th anniversary of Burma's Union Day. There are several reasons why this speech is worth noting. The presidentsaid that his government is holding talks with armed groups aimed at securing "eternal peace," an effort that requires the "participation of the entire national people." In effect, he was vowing to end the civil war that has plagued Burma for more than sixty years. (For an official copy of the speech, see here.)

Perhaps the most attention-grabbing fact in his message was the president's reference to thePanglong Agreement, the 1947 deal reached with the country's disparate ethnic groups by independence leader Aung San. It was this agreement that formed the basis for the union between the majority Burmans and the ethnic minorities.

Despite this, it's been quite a while since the country's leader was willing to give a positive mention to the Panglong Agreement in a Union Day speech.

In his Union Day messages, Than Shwe, the leader of the military junta, not only passed over the Panglong Agreement in silence, but also refused to mention the role of Aung San, who happens to be the father of Burmese opposition leader Aung San Suu Kyi. (She's shown in the photo above, against the backdrop of an image of her father.)

Instead, Than Shwe rather bizarrely preferred to invoke "anthropoid primates" discovered in Burma "40 million years ago," his rather peculiar way of asserting that Burma has a long and continuous history and that all of its people are unified. Anthropologists and historians found this sort of thing bemusing at best. Burma's ethnic minorities took it as an absurd insult to their search for equal rights and autonomy.

In contrast, Thein Sein's message acknowledged both Aung San's leading role in working toward "national solidarity" and the Panglong Agreement itself. If the president's words can be taken to mean that he accepts the principle of multi-ethnic agreement as the nation's organizing principle (rather than Than Shwe's program of coercive domination by the majority), then this speech potentially marks a big step toward reconciliation.

The civil strife in Burma has its roots in a lack of credible commitment by the government. The leaders who ruled Burma after Aung San's assassination in 1947 refused to honor the Panglong Agreement. The ethnic minorities felt betrayed, and launched struggles for equal rights and autonomy. Burma descended into one of the longest civil wars in the world.

When the military seized power in 1962, they did so under the pretext that this was the only way to prevent the disintegration of the Union. (What the ethnic minorities were actually demanding would have been described in most places as "federalism" - hardly a subversive notion in itself.) Successive military regimes violated the spirit of the Panglong Agreement and committed unspeakable atrocities against ethnic groups. No wonder the problem of mistrust of the government remains such a big issue.

In recent months the Burmese government has struck a series of fragile ceasefire deals with at least seven armed ethnic groups. It has been holding talks with some of the others. Many ethnic leaders - those who have negotiated ceasefires as well as those who have not - have told me that they wonder whether these truce agreements will lead to genuine political solutions. There is a widespread anxiety that the government will again renege on these deals when the former generals feel that they have gained adequate international legitimacy and are confident in their ability to shape the domestic political scene. Given their bitter experiences at the hands of past regimes dominated by the majority Burmans, the ethnic groups definitely have a right to worry.

President Thein Sein's rhetoric should be welcomed as an important step toward ending this crisis of trust. But he has yet to walk the walk. The international community should craft its incentives carefully to deter the president from reneging on his stated commitment by making the solution of ethnic strife a key benchmark for judging Burma's progress.

Good points! It's high time they move into Walk the walk phase.