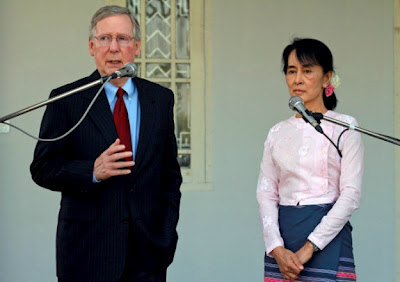 McConnell, the Senate's leading Republican, called it "an emotional moment," and said that both of them had probably thought "that we were never going to meet." "It's an incredible day," he continued.

McConnell, who has long been one of the biggest supporters of Burmese democracy movement, also welcomed president Obama's decision to restore full diplomatic relations with Burma last week. (That, of course, was in reaction to the Burmese government's release of hundreds of political prisoners and its conclusion of a cease-fire agreement with the Karen ethnic rebel group.) The Senator said that he is also convinced that Burmese President Thein Sein is "a genuine reformer" after meeting with him in the capital of Naypyidaw. McConnell also hinted that sanctions on Burma could be eased or lifted following the April by-election, which Aung San Suu Kyi (known to the Burmese as "Daw Suu") and her supporters are going to contest.

McConnell laid out three criteria for the removal of sanctions. First, the government should accept the presence of international observers at the April by-elections. Second, it should stop fighting with the country's ethnic minorities. And third, it should end its murky relationship with North Korea.

More importantly, the Senator said he would take advice from Daw Suu on the sanction issue. Many U.S. lawmakers share McConnell's optimism.

This is pretty remarkable stuff. McConnell is the architect of sanctions against the Burmese junta. The Burmese military and some foreign experts have tended to see him as a hardliner, a staunch advocate of tough measures against Burma's rulers.

Other countries are already forging ahead. Australia eased travel restrictions against Burmese officials in early January. Norway has decided to lift trade and investment sanctions. Some members of the European Union are considering whether to start lifting sanctions against Burma as early as February to encourage the reform process.

Now some of my own sources in Washington tell me that it's possible there could be a gradual lifting of some elements of the wide-ranging American sanctions against Burma, which include an arms embargo, bans on imports and investment, a ban on visas for senior government officials, and financial sanctions against regime leaders and their cronies.

The first thing to go would be a removal of the visa ban against officials. It would allow U.S. lawmakers to invite members of the Burmese parliament to the U.S. to provide them with exposure to democratic institutions. Then, depending on the results of the April-by election, President Obama can decide whether he wants to renew the investment ban, which runs out in May. Obama could also lift the 2007 presidential executive order that imposed financial sanctions against the regime's officials for their crackdowns against Buddhist monks and protestors in the same year.

Aside from this, though, other changes in the sanction regime, such as the arms embargo, are not likely to take place soon. Meanwhile, most of the major sanctions against Burma require congressional action, since they were passed into law by the Congress.

Some lawmakers are skeptical. Ileana Ros-Lehtinen, the Republican chair of the powerful House Foreign Affairs Committee, has criticized U.S. concessions to the Burmese regime as premature. As a result, it's entirely possible that some of the sanctions could continue right up until the next general election in Burma in 2015.

In any event, McConnell will be meeting Daw Suu several more times to coordinate the process. One can only hope that he'll with meet other stakeholders in the country, including representatives of the ethnic minorities and the leaders of the 88 Generation Student Group.