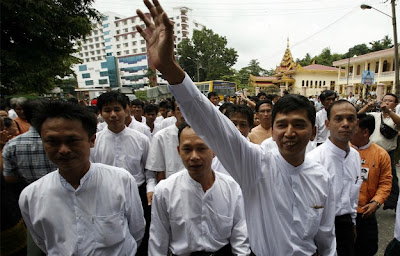 I didn't sleep at all last night. But it was worth it. I spent the night speaking with former friends and colleagues in Burma who were released from prison at midnight here on the West Coast of the U.S., where I live. (That was early in the morning local time.)

Yesterday I received a message from the family of Min Ko Naing (shown in the picture above back in 2007). You probably haven't heard his name unless you're Burmese. But within the country he's widely known as the second-most-important opposition leader, right after Aung San Suu Kyi. As the head of the national student association back in 1988, he organized many of the demonstrations and protests against the generals that rocked the country that year. His name, Min Ko Naing, means "Conqueror of the King," so the presence of that name on many of the leaflets that called upon people to resist had a certain symbolic resonance.

When the military cracked down, shooting thousands of unarmed demonstrators, he was a prime target for arrest. His first sentence in jail, which started in 1989, lasted for 15 years. Upon his release, he reorganized the veterans of the 1988 student groups into a new movement and launched a series of public campaigns calling for a national reconciliation. In 2007, when Buddhist monks led the people to another mass protest that came to be called the "Saffron Revolution," he again played a major organizing role. He landed in jail once again - this time with a sentence of 65 years. His alleged crime was sending and receiving e-mails considered "detrimental to national security."

What the message from his relatives told me was the news that we've all been waiting to hear for weeks: Min Ko Naing's family members had been informed that the authorities were about to free him, along with a long list of other famous prisoners. For some time the government had been dropping hints that a major release of political prisoners was on the way. According to the rumors, the big day was supposed to be Jan. 4, Burma's Independence Day. But it came and went with only an announcement of a reduction of sentences for some of those in jail. That was a big disappointment. People were wondering whether this meant that all of the government's recent promises of liberalization were a hoax.

But suddenly the story took a different turn. After sending me the message, Min Ko Naing's relatives set off for the prison in central Burma where he was locked up. They took up position outside the entrance of the jail and waited. And then, at 10 AM local time, Min Ko Naing came out, a free man. Thousands of local people came out on to the street and greeted him. His family took him to a house in the nearby town.

They had given me a phone number, and finally, around midnight in California, I made the call. I was expecting to hear the voice of the man whose number I'd been given, but it was Min Ko Naing himself who answered. I immediately recognized his voice. Back in 2004, I was the first person to interview him when he was released from jail then. Now, a few hours after he walked out of jail, I was on the phone with him again.

It was a surreal moment. It was hard to believe that it had finally come. As we spoke, a crowd of ordinary people and media, thousands altogether, were gathering outside the house he was sitting in, desperate to hear what he had to say.

His first concern, he told me, is to make sure that the rest of Burma's political prisoners are freed. This morning's release involved hundreds of them, including some of the most important leaders of ethnic resistance groups and some of the Buddhist monks of the Saffron Revolution. But there are still dozens in jail.

He also stressed the need to end the government's continuing war against the Kachin ethnic group in the north of the country. This, he said, is crucial if President Thein Sein really wants to demonstrate his commitment to changing the old ways. Finally, he said that government needs to show that its "so-called reforms," as he called them, really benefit the general public. Freeing prisoners is important for its own sake, he said. But we shouldn't give the government a pass just because it does that. We should expect more.

The conversation lasted 20 minutes. He closed by telling me that he had to go speak to the assembled crowd. You could hear the people's excitement in the background. As I hung up, I couldn't entirely suppress a feeling of guilt. Many of the people I demonstrated with back in 1988, like Min Ko Naing, have spent decades of their lives in jail. I've lived a different life in exile, trying to gain skills that might one day come in handy back at home. What I've always said is that I would be ready to go back once all of Burma's political prisoners are released. After yesterday's events, I'm seriously thinking about whether it's time to head home.

Min Ko Naing was only the first of the ex-prisoner I spoke with last night. Many other conversations followed, and somehow I never quite managed to get to sleep. I'm looking forward to many more sleepless nights in the weeks ahead.