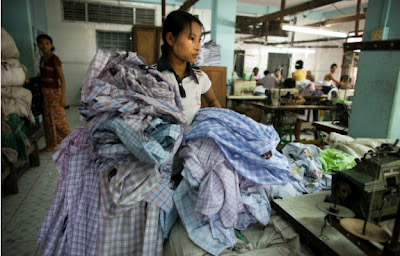 As I write this, about 2,000 Burmese workers in a town on the outskirts of Rangoon are continuing a strike at the Chinese-owned Tai Yi slipper factory. (The photo above shows a worker at a garment factory in Rangoon.)
"This could be the biggest labor strike since oil workers went on strike and marched in protest against the Burma Oil Company and British colonial rule in 1938," Phoe Phyu, a young lawyer who represents the workers, told me earlier this week. "More than 90 percent of the workers joined the strike."
The walkout started on Feb. 6, when the company refused to pay five days of wages that it had deducted for a holiday to mark the Chinese New Year, which is not officially recognized in Burma.
An industrial worker in Burma earns about $50 to 60 per month. All workers have to work overtime, and draw on hard-to-get performance bonuses to make around 60,000 to 70,000 kyat ($75 to $87.50) a month.
The workers from Tai Yi factory are now demanding a 100 percent hike in their hourly wages from 75 kyat (less than 10 cents) to 150 kyat ($0.18) and an increase in their monthly bonuses from 6,000 kyat ($7.50) to 8,000 kyat ($10). After a series of negotiations between the owner, government officials, and the workers' representatives, the company only agreed to raise the hourly wages by 25 kyat ($0.03). This incredibly low-wage situation for ordinary workers shows that poverty is deepening and inequality is widening in a country where you have to pay a minimum of $625 minimum for mobile phone service. The workers turned down the company's offer.
Meanwhile, the company is trying to get the workers to knuckle under through a variety of threats, including reducing the supply of water to the dormitory where they live. The Tai Yi case was submitted to the government's Trade Dispute Committee late last week for arbitration. But Phoe Phyu has few hopes for a positive outcome.
"As my past experiences have showed, the regime's Labor Ministry has not given any support to the workers," he told me. "The chance that the strikers will win a fair settlement is very slim."
Although there have been some labor protests in Burma's industrial towns over the past few years, the current strike is significant not just because it's the largest one to take place in the country for several decades, but also because it's taking place in the context of a new law introduced last year by the government. The law legalizes labor unions but stipulates that they have to have the approval of the official Labor Union Federation if they want to stage a strike. And since the government has not allowed any labor unions to register under the new law, the individual workers are technically not entitled to stage a strike.
"The law prohibits continuing a strike once the case has been submitted to the Trade Dispute Committee," female strike leader Moe Wai told me on the phone. "Even though the law does not protect us, we've vowed that we'll go on fighting for our basic rights."
So far the government has avoided using force against the workers, since it can't do so without contradicting the rhetoric of reform that it has been using to buff up its image at home and abroad. The workers are also receiving growing support from members of the general public, who have been providing them with water and food. The activists are using that support to push the limits of what is allowed by the powers-that-be. Political scientist Kevin O'Brien has dubbed this approach "rightful resistance," his name for action that "operates near the boundary of authorized channels." This is exactly what we are now seeing in Burma.
Rightful resistance also emboldens activists like Phoe Phyu, who has represented political prisoners, farmers, workers, and the poor in hundreds of legal cases. It helps him to leverage the reform rhetoric of the government for the sake of his causes.
Phoe Phyu, who has been detained three times for his advocacy work (including a year spent in prison starting in 2009), is feeling the wind in his sails. "Earlier, when I was a trouble-making lawyer, I didn't get much help," he says. "Now a growing number of my colleagues in the legal community are supporting me."
Posted by Min Zin at 10:38 AM